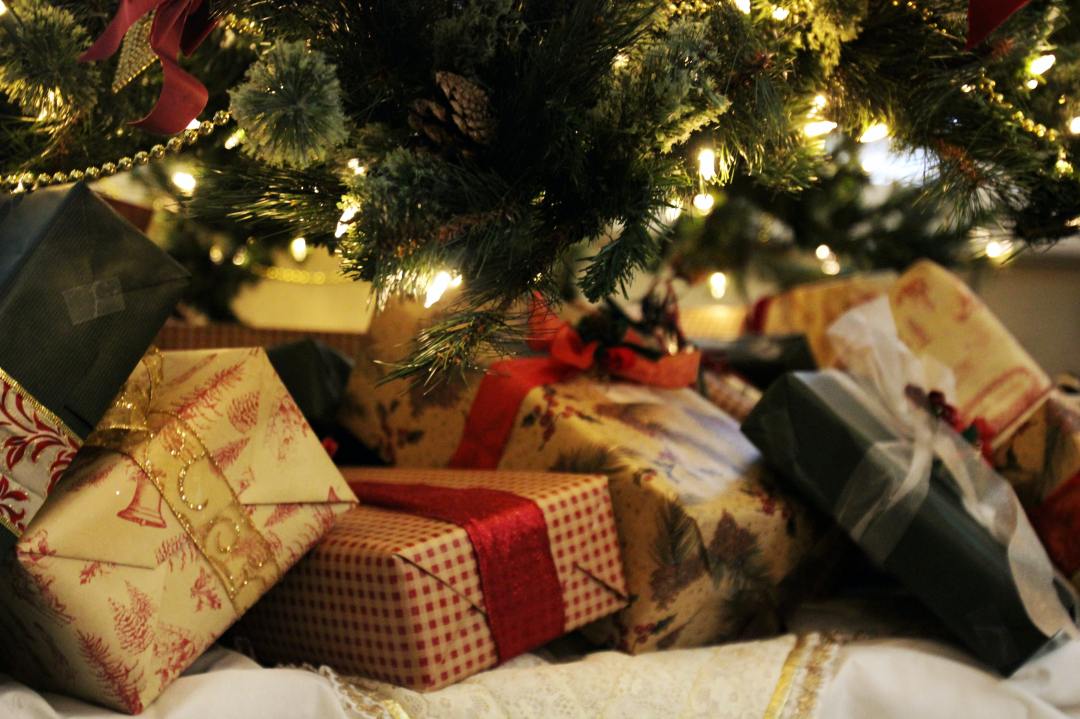 The Secret Gift of Christmas

You can listen to a reading of this essay here.

“A secret always makes you tremble.”[1]

Christmas seems to tantalize my imagination like no other holiday. I can’t explain it, but there’s something I find enticing about this time of year. There’s a joy in waiting, in anticipating something I know arrives every year, and yet, year after year, that anticipation doesn’t seem to diminish. In a way, Christmas is the same every year. Yes, there are many things about how we do Christmas that will change, particularly in the Covid age, but the event itself does not. Each and every year we celebrate the event of a birth, an advent of something we see as critical to the meaning of human existence itself. The event is one that we know will come. Christmas day comes like it has for over two thousand years. Potentially, it may continue to do so for many centuries to come, when any memory of us has long since faded away into history. But for the moment, none of that matters. The event we know to come, which always comes, emerging from the past and returning from the future, once again brings our gaze back to the present, the eternal moment we call Christmas.

Christmas day, as a moment in time, comes whether we’re ready for it or not. As such, there’s no actual mystery in its arrival. Christmas will come and go as it does every year. It’s something we can count on during difficult and trying times such as the year we just had. Without a doubt, that dependability has been tested as families and friends have had to modify, change, or even forego some holiday traditions. Despite this, we still wait in the knowledge that the event of Christmas will happen again. Christmas is an event undeterred, coming in times of stress and heartache as well as joy. I’m reminded of the Christmas Truce of 1914, an unofficial ceasefire when frontline soldiers mingled and gathered to exchange stories, sing carols, and play games in World War I. Christmas happened, and it happened within the most unlikely of circumstances, transforming a scene of violence and brutality into one of the greatest symbols of hope and peace ever witnessed by human eyes. Christmas happens, doing so in a way that goes beyond the surface level manufactured holiday images of commercialism and holiday shopping we’re so accustomed to. It happens, endures, and manifests within all circumstances and in the deepest sense of expectation, arrival, coming, and advent.

As I return to my own personal reflection, I’m still trying to understand the enticement of Christmas and the way it draws me toward it like no other holiday. The trappings of the season, time with family, exchanging gifts, meals, Christmas carols, and more make this time of year a wonderful experience for many. I’m thankful that this has been true for me for several years. However, much of what has been done before cannot be so this year. There are family and friends I’m accustomed to seeing that I will not see this Christmas. There are events and traditions that can’t take place because of health and safety. Christmas isn’t the same this year. Much is missing, more than I thought was possible. And yet, Christmas will come and people will feel its arrival all across the world. Therefore, despite all that is missing and different, despite all the pain and loss, I once again wait for the transforming power of this event to appear as it’s done so many times before.

Thus, I can’t help but feel that there is something else, something deeper, calling to me—to you—within Christmas itself. And this deeper something, transcends both you and me, transcends this year’s Christmas, and the next, and all Christmases that came before and will come after. That underneath all the wrappings of Christmas is a gift, a secret gift, where the true miracle of the Christmas event is found. What is this gift? It’s one we can’t know, nor would we wish to, for once known, the gift itself would disappear and the essence, I dare say, the magic of the moment would be erased, lost forever.

One of my favorite authors, the French philosopher Jacques Derrida,[2] used the term gift as a way to describe the unnamable quality within events, specifically those meaning making events that go beyond our own ability to name or describe them. Life is full of such events. For instance, there are moments in time so emotionally and spiritually beautiful so as to leave us speechless and utterly humbled. Then there are others that terrify, events that shake our very being and unsettled even our deepest held beliefs. But within both, good or bad, is the gift of the moment, which within we encounter the impossible. John Caputo, explains that “The gift, one might say, is how things ‘come,’ how the impossible happens.”[3] This gift, Derrida writes, is “the gift of something that remains inaccessible, unpresentable, and as a consequence secret. For one might say that a gift that could be recognized as such in the light of day, a gift destined for recognition, would immediately annul itself. The gift is the secret itself, if the secret itself can be told.”[4]

Gifts come with intent, we intend-to-give this or that to another. Thus, a gift isn’t just the thing itself, it’s the purpose, meaning, and intent that initiates the act of giving. Our gifts carry an action meant to bring about something special within the life of another—celebrating a friendship, commemorating a special occasion, offering a symbol of our love. And once that act is complete, and the gift has been given, the gift is no more. Its fulfillment brings about its own end. Furthermore, the action carries an unintended consequence, a debt, even if it’s just a debt of gratitude. Thus, gift giving, in the truest sense, never lasts more than a moment before it’s gone. The gift is unwrapped and the mystery is revealed.

A true gift is always a mystery, one continually given without the actual exchange or knowledge of the gift itself. The gift comes, but eternally so, without expectation that the mystery of this gift will ever be received. For Derrida, “Authentic mystery must remain mysterious, and we should approach it only by letting it be what it is in truth—veiled, withdrawn, dissimulated.”[5] It’s like remaining in that excitement that comes from having a secret Santa, except the giver’s identity is never revealed and no actual exchange takes place. The joy comes from the secret, the state of being in continual expectation. Thus, the secret is an invitation, an attraction, an enrapturement remaining forever so within the heart.

What Derrida is describing is the excitement, the enticement that comes from the wonder of mystery, of experiencing the miraculous state of what-if, could-be, and maybe. There’s nothing quite like that feeling of expectation, the enthrallment that comes with not-knowing. As a young child, I can still remember the excitement of Christmas Eve. As many children do, I would lay awake and wonder what Santa would bring me. Would he bring the toy I had asked for, the one I desired and wished for the most? And as I laid there in bed, I can still remember the feeling of anticipation that verged on being literally overwhelming. My body trembled in expectation. I tossed and turned, my eyes open for much of the night, and hoped beyond hope for the fast arrival of Christmas morning. Of course, it did. Christmas arrived as it always does and my waiting, my expectation, immediately became one of reception. In an instance my expectation ceased, erased by receiving what I had long for. Receiving brought a kind of happiness, but what I remember most about Christmas as a child was the waiting, the longing, the trembling feeling of excitement. The novelty of the presents would fade over time, but the real joy came from the waiting. As an adult, I experience a taste of that same feeling every now and then. A wrapped present can still bring a fraction of the experience I felt as a child. The moment right before unveiling the mystery underneath a neatly wrapped present. There’s a part of me that never wants to open the gift, to hold back and stay just a bit longer in that state of mysterious wonder, to rediscover how Christmas once made me tremble in excitement.

Derrida writes, “A secret always makes you tremble.” Gifts cause us to tremble because it carries a secret that’s hidden under the veil of wrapping paper. It’s a kind of miniature encounter that brings us face-to-face with the unknown. The gift “exceeds my seeing and my knowing.”[6] And undoubtedly, it’s the gift that defines Christmas. However, the presents we exchange with one another are but a pale reflection of the actual gift hidden within Christmas itself. Our waiting, our expectation, our trembling, begins and grows from the secret gift of Christmas. It’s this secret, one reflecting the deeper meaning of the season, which makes this a season a time of anticipation. Again, the secret isn’t about the arrival of Christmas. Christmas has happened before, is happening, and will continue to happen. The secret is the gift never opened, never exhausted. Despite all the challenges we face, the gift of Christmas always has more to give. It is the gift that always gives. And it will continue to bring the possibility of the impossible into the hearts and minds of children and adults, the rich and poor, the religious and nonreligious. In times of happiness and uncertainty, comfort and fear, love and even hate, Christmas brings the impossible to life. The secret is why Christmas is able to eternally give. It provides a continual expectation that keeps us anticipating and trembling at what could-be every Christmas season. When Christmas comes, it’s the same trembling felt by those present at the first Christmas so long ago. We’re each brought before that secret gift, the mystery of God coming as a child. And though we’re separated from those at the manger by thousands of years, we share with them the same trembling feeling that came from the secret gift. Every Christmas, humanity trembles in excitement—humans past, present, and future—at the coming of God. On this Christmas Eve, I will lay awake once again in anticipation of what is to come. I wait in trembling excitement for the secret gift of Christmas.

[1] Jacques Derrida, The Gift of Death, trans. David Wills (Chicago: The University of Chicago Press, 1995), 53. Italics in the original.

[2] Perhaps an unlikely choice for a Christmas reflection, but I can’t think of many who thought about religion and God more deeply than Derrida.

Photo by Sheri Hooley on Unsplash